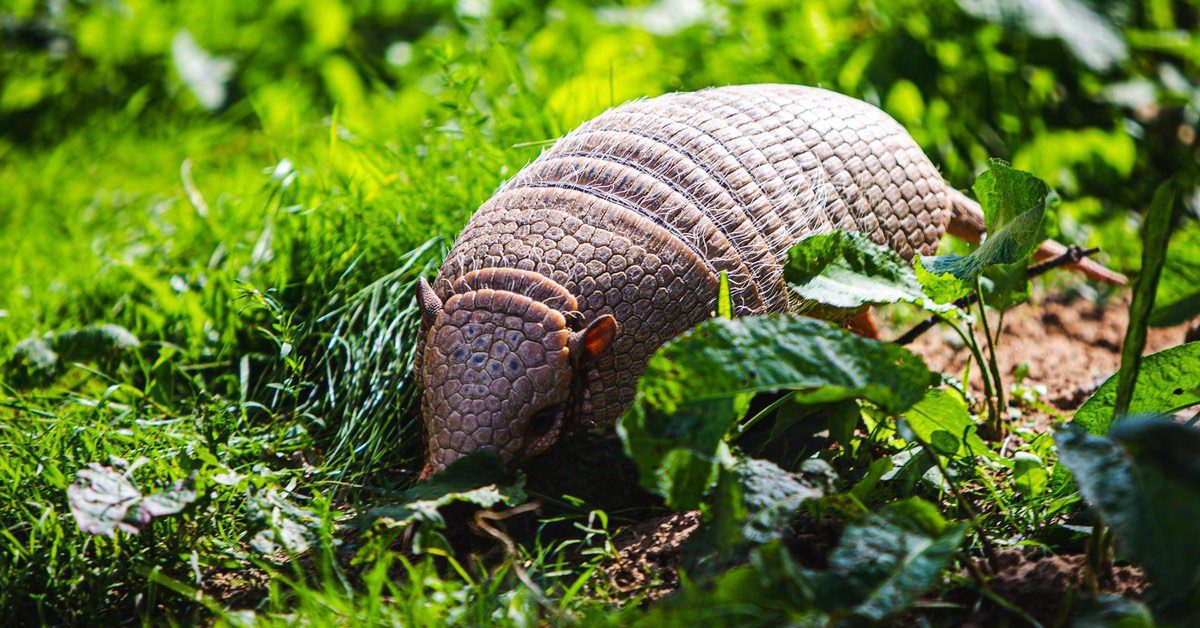 What You Need To Know About Armadillos In Upstate SC

The nine-banded armadillo (Dasypus novemcinctus) is one of several armadillo species that together are all part of the genus Dasypus. However, this little guy has shown a uniquely special talent for continental migration.

On the one hand, these odd-looking little critters can help control other much more painful pests. This is because their natural diet mainly consists of insects, especially ants, including the fearsomely, painfully aggressive fire ant found in parts of South Carolina. On the other hand, however, for what they provide in terms of pest control, they also more often than not ruin through their destructive habits on farms, gardens and around human structures.

How did Armadillos Get to South Carolina?

Today, the nine-banded armadillo (we’ll call it the armadillo from here on to keep things simple) is found throughout South Carolina, including its northern part. There have also been increasing reports of armadillo presence in North Carolina.

This isn’t so much because anything about the state itself is special for them, though. Instead, once the nine-banded armadillo started spreading across the United States in the 19th century, places with warm climates and few natural predators became accessible migration destinations.

All of South Carolina fits the bill nicely for your average armadillo’s living needs, and it has no shortage of other creatures that are tasty food sources by their standards.

If you live in upstate SC and recently started noticing these strange nocturnal, armored little beasts around you, here’s what else you should know before you get too used to them.

Armadillos on Your Farm and Garden

Because armadillos love to get their claws on ant and termite nests or just about any small insects and grub concentrations they can find, they usually go digging for their food. Unfortunately, many places where all of their favorite insects and other tiny food creatures are found also happen to be garden and farm plots. And armadillos can dig quite deeply: their highly sensitive noses let them detect subterranean creatures as deep as 10 inches below the soil, while the holes they create can quickly sink much deeper than that.

Because of this, allowing armadillos in upstate SC to wander around your land freely is a hazardous idea if you have crops or gardens of any kind. What’s more, in lawns, fields and pastureland, the holes left behind by excavating armadillos can be a serious injury risk for wandering animals or even a careless human or two.

The same propensity for heavy digging that armadillos apply to gardens can even become a problem for homes and other structures. Termites, ants and other insects often love to build their nests right around the edges and foundations of houses and sheds. If an armadillo sniffs them out, it will tear up whatever ground it can to reach the nests below.

On the one hand, this might seem like a great way to eliminate some seriously destructive insects pesticide-free. Still, you should keep in mind that the armadillo’s holes are themselves a danger for structural integrity and structural insulation if they dig deep enough. They absolutely can dig deep enough, too -these little guys can seriously move some dirt.

Let’s start with leprosy. Yes, that mysterious, infectious, tissue-destroying disease you might have seen in movies about the Middle Ages is caused by Mycobacterium leprae. Also, oddly, armadillos are one of the few animals aside from humans that are susceptible to it. Thus they sometimes carry the bacterium on their bodies.

This particular armadillo danger is quite rare in practical reality. Some studies have shown that as many as 20% of some armadillo populations can carry the bacterium, but for a human to get it would require fairly intimate, direct contact with your skin.

Nonetheless, the leprosy angle is worth keeping in mind if you get the urge to handle these mostly gentle creatures by yourself. The disease can be hard to detect right away but can profoundly damage the tissues it infects.

As far as rabies goes, armadillos don’t often carry it, but it’s not exceptionally rare among them either. So if one bites you (and they definitely can bite if you’re not careful about touching them), you can look forward to the need for a heavy prophylactic injection against this highly lethal virus.

Armadillos in Upstate SC, What to Do When They Strike

If you start noticing the signs of an armadillo invasion of your land, it’s a good idea to take action quickly. Sure, these little guys are cute, personally harmless and interesting to behold, but their potential for destruction shouldn’t be underestimated.

If they’ve started digging around your home or garden, it could be a sign of equally destructive termite problems that you hadn’t noticed before. Before reaching for your tools and risking your health, calling in wildlife removal and control experts for a professional assessment of how and why your armadillos arrived and removing them safely is an excellent idea.