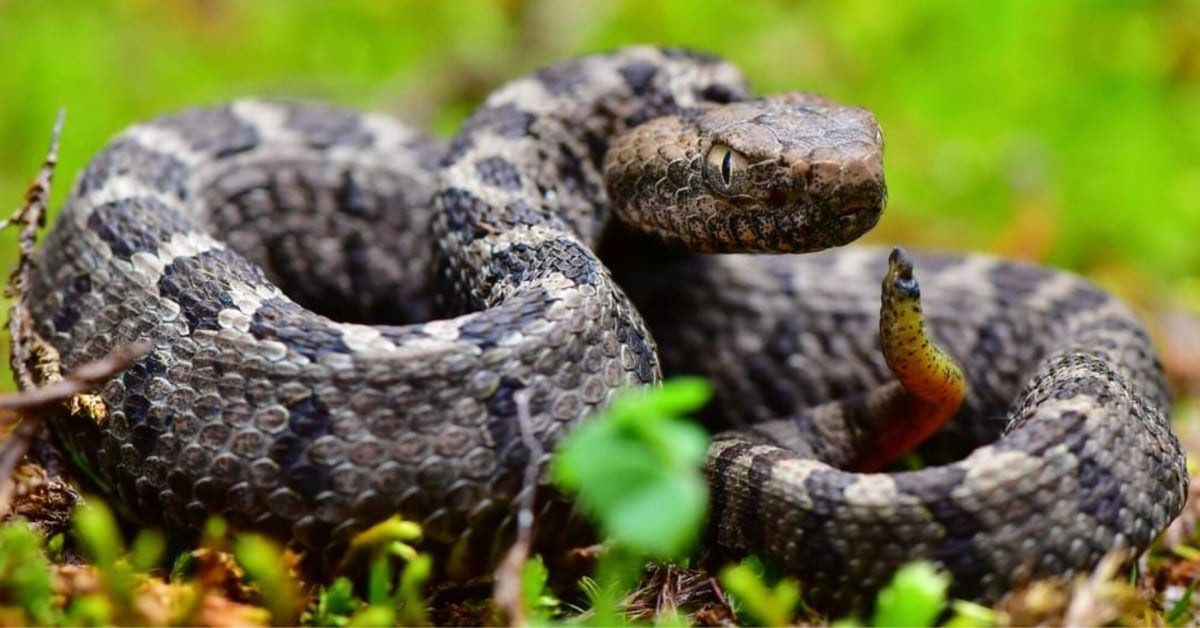 Venomous Snakes of South Carolina, hmm.. can you believe there are six, and they can be in your backyard.

Approximately 5.4 million people are bitten by snakes each year across the world. So if you live in South Carolina, it’s essential you know about the snakes in the area to avoid being bitten.

A bite can lead to an infection that threatens your life. It’s for that reason, we’ve created a list of venomous snakes in South Carolina to watch out for.

Get ready to whip out the snake repellent, or better yet, be safe, and get help to have them removed after you check out this list of what these venomous snakes of South Carolina can do to you.

The eastern diamond rattlesnake is one of the largest venomous snakes in North America. Depending on their size, they can weigh a massive ten pounds and are found in places like:

If you spot these snakes, you’ll notice they have a diamond pattern on the back of their heads in the colors of yellow and black. While their diet typically encompasses squirrels or mice, they will bite you if they feel provoked.

Being bitten by this snake can cause:

While they don’t typically kill people after biting them, you need to keep track of any symptoms you have following the bite. The best thing to do is see a medical professional, so they can inform you of the following steps to take.

Cottonmouths are also known as water moccasins because they are water snakes. The snake’s head is triangular, and they get their name because the insides of their mouths are white.

Including mice, the cottonmouth enjoys eating frogs and small insects. Even though they don’t tend to bite people, that doesn’t mean they won’t.

When they do bite, the effects are devastating because they can result in tissue damage and internal bleeding.

This snake can be found in several places, including near swamps, and in rocky areas. If you don’t know how to spot this snake, you will need to watch for an orange-reddish head.

The pygmy rattlesnake, like the copperhead, can be found in several areas, including forests, marshes, and creeks. If this rattlesnake bites you, don’t put ice on it.

Instead, seek medical attention as soon as possible and remain calm. You might begin to notice your vision blurring or becoming weak following the bite.

The coral snake is dangerous and will bite you, but it won’t typically kill you, although its venom is very toxic. The coral snake can be spotted due to its bright black, yellow, and red rings.

The coral snake is often confused with the red rat snake because of its colors, but they aren’t the same. If bitten, refrain from wrapping the area and remove jewelry in case swelling around the bite begins.

The timber rattlesnake has many names, including the canebrake and banded rattlesnake. They can be found living in areas like pine forests and cane thickets.

If you find some lurking around your home, the best plan of action is to avoid them and call in professionals to have them removed. If they feel threatened, they will rattle their tails as a warning and strike to bite if the threat continues.

So, here you have it, the 6 Dangerous Venomous Snakes of South Carolina. Now it’s time to take action if you find one or many in your yard.

The Venomous Snakes of South Carolina

The snakes of South Carolina are here to stay and don’t plan on finding another place to go. If you’ve got a snake infestation, you must call in professionals to rid you of the problem before you or someone in your family gets bitten.

Don’t know who to call? Contact Precision Predator Removal and let our trained experts take care of the situation before it gets out of hand or someone gets hurt.